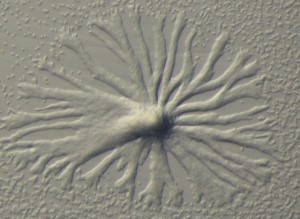 We are interested in the role of the Ras subfamily of proteins in the growth and differentiation of Dictyostelium. Upon starvation the hitherto solitary amoebae aggregate by chemotaxis, which then forms a multicellular slug, consisting of pre-stalk cells at the anterior end and pre-spore cells at the posterior end. This linear arrangement of the two cell types provides the simplest model for studies on the formation of a developmental pattern from an apparently homogenous starting population of cells.