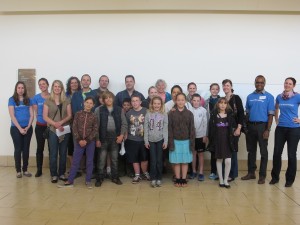 April 29th was the Day of Immunology (DOI), a day designated by immunologists around the world to bring immunology to the public. The second year of this event was a huge success at the Life Sciences Institute again. DOI was led by Dr. Ninan Abraham (I-cubed Research Group Leader, Department of M&I/ZOOL). This outreach event involved graduate student volunteers to deliver the program which took place on April 26th and April 30, 2013. The event targeted grades 5-6 students and incurred no costs to the schools. I-cubed graduate student presented at the LSI to students from a Langley home-school, and included parents who took part in the activities, then visited a second school in Kitsilano, delivering activities at their classroom.
The day’s activities and take home messages focused on the following key points:

The Prezi presentation about microbes, infection and the immune response was adapted by Morgan Roberts, a grad student in the Ken Harder lab (I cubed research group, Dept of M&I).

April 26th event with Lochiel U-connect from Langley: This is a home-schooled group of 5-6th graders that came to the LSI

with teachers and parents. The exercises were performed in the LSI and included: microscope stations with slides to view, swabbing of plates, viewing viral plaque assays on fixed plates, and demonstrating the spread of microbes using the GloGerm kit. After lunch, the students and parents got tours of the Flow Cytometry facility and the confocal microscope with research experiments on display.

The DOI group noted major advantages of bringing this younger cohort of students to the UBC campus, and to the LSI. The volunteers were able to show the students high-end equipment and show them the open floor plan labs. The Graduate student volunteers worked with Dr. Abraham to develop hands-on exercises and demonstrations.

The off-site Day of Immunology was on April 30th at General Gordon Elementary, where the LSI team of Researchers and Students provided hands-on demonstrations to a total of 53 students in two classes (Grade 5 and 6)

Summary of the Activities: 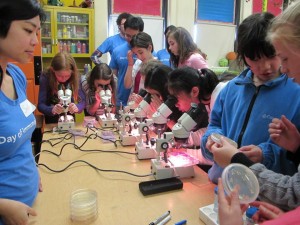 2. Swabbing Station – make your own plates 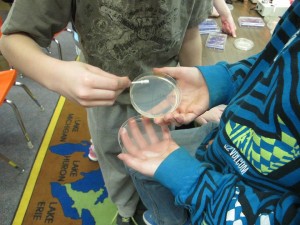 3. GloGerm – showing how infection can spread 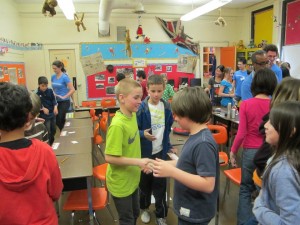 Later, after everyone was done at the swabbing stations, Dr. Abraham announced that they had been exposed to a harmless glowing “germ” and determined who had been exposed by locating glowing hands using a black light. Everyone’s hands were checked and then the class tried to figure out where the “germ” came from. After explaining that it is a training tool, the students were directed to wash their hands.

Day of Immunology Magnetic Frames were created for the students to take home with them. Each frame had the same picture of a Macrophage engulfing and destroying a tuberculosis bacterium. The frame contained an interesting fact about the immune system. 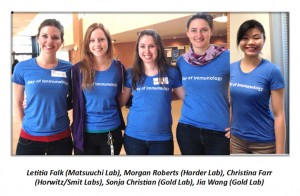 Special thanks to the Grad students-Jeff Dong, Letitia Falk, Christina Farr, Grace Poon, Sally Lee, Morgan Roberts, Sonja Christian, Nicolette Fonseca, Adam Plumb, Jia Wang and LSI staff members, Julie Walton and Sharda Muni. More information will be available on the I- cubed website shortly (see https://iii.lsi.ubc.ca/). Thanks also to Joanne Fox (Michael Smith Labs and the Dept. of M&I) for the loan of the dissecting microscopes and the loan of some of the giant stuffed microbes. Thanks also to the funding from the Faculty of Science Outreach grant to the Dept. of M&I and the LSI for their support of this event.

Click on Links below to look at more pictures: